The first references to a hermitage devoted to Saint Mary located in the vicinity of the lands of the island’s governor date back to the early decades of the 16th century.

In the late 17th century, several extensions of the building were carried out to form a three-nave church, each one of which has a chapel, plus two more chapels in the main nave. The last construction stage was completed in the period between the late 17th century and the beginning of the 18th century with outstanding woodwork for its coffered ceiling.

The structure of the church has survived to present day, despite the devastating fire in 1978, which destroyed most of its movable heritage. The carving of Our Lady of Candelaria, attributed to Martínez Montañez (circa 1650), the effigy of Our Lady Comforter of the Afflicted by Martín de Andújar (1637) and that of Saint Michael by the German school of the 18th century, are examples of artwork that was consumed by fire. Fortunately, some paintings, goldsmith and silversmith pieces and liturgical vestments escaped the fateful fire.

The church reopened in 1993 preserving its original structure. Its four 16th and 17th century façades are clear examples of the evolution of art in the Canary Islands through stone craft. Particularly remarkable are the small Gothic façade crowned by a round arch in the lower sacristy, the two gates of the main façade and the one located in the northern flank of the building, which shows Portuguese influences.

The classicistic-style tower was erected at the beginning of the 20th century, but was moved to the southern part of the church after the fire. This location of the tower is based on the original construction design. As regards roofing, the reconstruction of the church made it possible to preserve its former designs and structures. 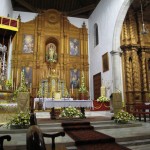 A tour inside the church provides the opportunity to contemplate newly built altarpieces, based on previous designs, which have been made using traditional cabinetmaking techniques, such as the altarpiece devoted to Our Lady of the Rosary.

Most of the imagery that the church houses is the work of sculptor Ezequiel de León y Domínguez, namely the Virgin of the Afflicted, The Nazarene, Saint John, Ecce Homo, Our Lady of Mercy and the Christ the Redeemer. The other works, however, were commissioned to workshops in mainland Spain, such as the Lord tied to the column, which was the work of Sevillian sculptor Francisco Fernández.

The Virgin of the Rosary and Our Lady of Sorrows are both examples of sculptures that escaped the fire, and so are some paintings, such as that of the Virgin of Antiquity, an anonymous copy of the one found in the Cathedral of Seville. The rich goldsmith and silversmith pieces of the silver processional Cross, which is the oldest in the Canary Islands made by Francisco de Soto in 1560, are also remarkable.

The First Church of Our Lady of Conception was declared a Cultural Heritage Site under the category of “Monument” in 2003.

The oldest stone stairway on the island, dating from 1570, can be found in the surrounding area of the church of Concepción, next to Domínguez Afonso square, in Realejo Bajo.