July 25th, 1496, marks both the end of the Spanish conquest with the surrender of the menceyes [the Guanche Kings] to the Castilians in Taoro territory and the first reports of a site of worship to honour St. James the Apostle. The Castilians laid the foundations of a church in no time and worked hard on building it “with the splendour of those times”.

The first Christian church of Tenerife was, thus, built. According to poet Antonio de Viana and historians Juan Núñez de la Peña and José de Viera y Clavijo, nine brave menceyes along with other relevant aborigines were baptised in its crude baptismal font.

A few years later, holding the status of parish, the church was architecturally strengthened thanks to consecutive contributions in kind for construction materials and workers by the end of the 16th century.

In the period between 1604 and 1626, the church was brought to its present dimensions through several construction stages within a short period of time. Therefore, the current building is made up of three naves with chapels flanking the presbytery and a sacristy each. This structure has survived up until now, with other elements being added, such as the tower, in 1774, and an additional set for the façade during the 20th century, which contributed to extending its dimensions. The church was built using lime, stone and clay. The three coffered ceilings of the chapels are great examples of Mudéjar-style wooden ceilings. 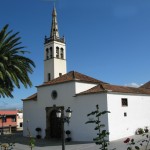 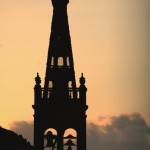 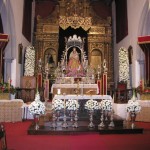 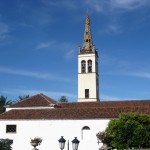 A tour inside the church gives us the opportunity to see the altarpiece devoted to Saint Barbara, which was made using barbuzano wood and has been classified as “a masterpiece of Canarian Baroque”. In the central niche, the image is attributed to Pedro Duque Cornejo (c. 1740). Two little sculptures of Saint Peter of Alcantara and Saint Andrew are located in each of the two side niches.

The altarpiece of Mercy, by Antonio Álvarez (1678), is another wooden structure, which includes the images of the Christ of the Mercy, Our Lady of Sorrows and Saint John the Evangelist. The beautiful carving of the Nazarene, made by the sculptor Martín de Andújar in 1637, is located in the altarpiece that was brought from the old Franciscan monastery of the town.

The magnificent Mudéjar-style coffered ceiling with the altarpiece devoted to the Apostle, which dates from 1680, located in the presbytery of the church. The presbytery houses the image of Saint Isidro Labradore (c. 1676) and the image by Manuel Perdigón, dating from 1920. In the northern aisle of the church, the chapel of Our Lady of Los Remedios allows you to contemplate the altarpiece dedicated to the Virgin Mary. This is the work of Antonio Álvarez which apart from its central character by Fernando Estévez from around 1817, includes carvings of Saint Lucy (16th century) and Saint Francis (17th century). Both of them were brought from the town’s old Franciscan monastery. The three Flemish tables depicting scenes from the life of the Apostle, which were attributed to the Master of Delft (first quarter of the 16th century), can also be found in this chapel. This is one of the most important works of the artistic heritage of the Canary Islands.

The church of Santiago Apóstol, which was the first Christian church to be built in Tenerife, was declared a National Heritage Site, under the category of ‘Monument’ in 1983.

Built in 1669, the altarpiece of Souls is dominated by one of the oldest paintings on this topic in the Canary Islands. The images of Saint Peter, Saint Sebastian and Saint Michael, placed in the lower part of the altarpiece, complete the set. The altarpiece of Saint Joseph (17th century), located at the foot of the nave, was originally devoted to the Conception, as it can be appreciated from the surrounding symbology, and brings our visit to an end.

The church houses other sculptures and paintings, such as the Lord tied to the column, the Immaculate Conception by Bernardo Manuel de Silva (c. 1700), the painting of Saint Thomas Aquinas, or the Crucifixion by Pedro de Orrente. The vast heritage of silver works that is present in the premises of the church contains pieces dating from the 16th to the 19th century, as the prominent filigree cross (1677) or the Mexican pyx (1739).