Realejo Bajo was declared a Cultural Heritage Site, under the category of ‘Historic Complex’, in 2005 and is the most relevant artistic site in Los Realejos, since it holds almost 70% of the whole historic complex.

It originated thanks to the establishment of the  Princes’ Manor  and the Partition of lands by the island’s governor for the settlement of the tenant farmers who would work the land in the cultivation of sugar cane.

First Church of Our Lady of Conception,  lies at the heart of Realejo Bajo and several steep streets stem from it offering visitors a chance to enjoy a panoramic view of its architectural development. Many two-storey houses dating from the 17th to the 20th century can be found in the area.  The Rural Hotel Bentor,  is the perfect example of how rural tourism has boosted the refurbishment of mansions of high historic interest. 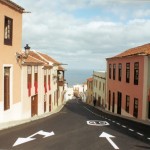 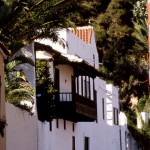 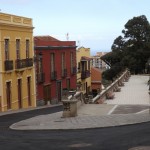 Unique architectural examples of the 18th and 19th centuries, which also feature some modernist, eclectic and historicist characteristics, can be found along the streets of Guillermo Camacho, Pérez Galdós, La Acequia and La Alhóndiga.

The buildings of La Parra Alta and La Parra Baja, belonging to the aforementioned Princes’ Manor, date back to the 17th century, and are part of the historic complex.

The bandstand located in the square is an example of the most recent architectural works developed in this area. It was built in the 1920s, according to the schemes set out for this type of construction.