GPXPDF
The trail known as “Sendero del Agua” – “the Water Trail” in English – is the result of efforts on behalf of the town of Los Realejos, during several decades, of bit by bit renovation of the old trails that were used by locals and fishermen to gain access to the coast.
Now, most of the expanse of the nature reserve of the Rambla de Castro with its different enclaves, can be visited on foot, and the beauty of the municipality of Los Realejos’ coast with its sand and pebble beaches, bays and natural pools can be appreciated. All this within the protection of the reserve that was established in 1987, that received its current denomination in 1994, and has a surface area of 45.9 hectares. This trail offers visitors the opportunity to take an interest in the area’s natural wealth, its fauna and flora and its need for preservation. The trail leads into one of the most beautiful areas of the island, where nature, history, the landscape and legends merge in a journey sprinkled with beauty and with the always present murmuring of water. The famous palm grove, the Castro manor, San Fernando’s Fort and the pump station of la Gordejuela are essential waypoints on this trail, that tell us about the natural, historic, strategic and industrial importance of this place.

Church of Our Lady of Guadalupe

The parish church of Our Lady of Guadalupe is a capacious building with the image of the name giving saint inside, work of the sculptor Ezequiel de León y Domínguez, carried out in the 1980’s. 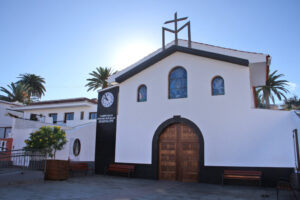 Burgado is a kind of sea snail – phorcus atratus – from the family of the top snails. “Caleta del Burgado” is the old name for the “Los Roques” beach, that derives its name from the three rock formations that exist there. These are called “Roque Chico” (small rock), “Roque Grande” (big rock) and “La Pata” (the paw). 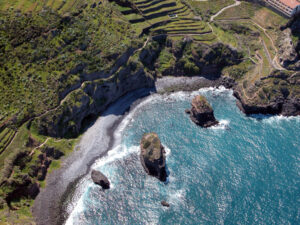 All along the coast, fishermen gave the beaches, ponds and davits interesting and picturesque names, such as “Callao de Méndez” (callao = pebble beach), “Pejereyes” (sardines) or “Piedra Cagalamagua”. 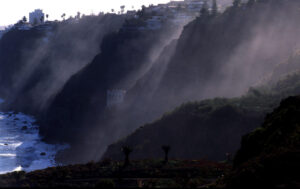 The Gordejuela pumping station was planned by the house of Hamilton and the project was commissioned to the engineer José Galván Balaguer. Construction started in November of 1903 and ended in June of 1907. The boilers were set up at 100 metres distance from the building with a 43 metre high tower and plumbing and steam engines which were the first ones on the island of Tenerife. 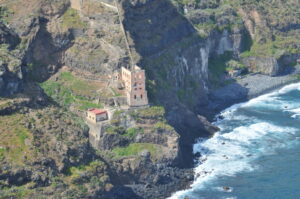 Godínez is only one of the names given to this ravine along its course. It is the result of several tributaries that join, starting in the mountains, down to the sea, receiving the names of “La Calera”, “La Lora”, “Godínez”, “La Fajana” or “del Agua”. 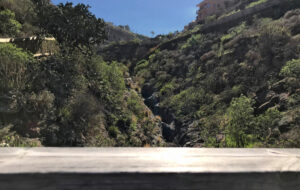 The Monster of San Vicente

In 1970 strange noises were heard coming from a cave in the area, but it was never found out what caused them, although several stories existed to this effect. The episode, reported in all the local papers, became known as the “Monster of San Vicente”.

The fortress of San Fernando is one of three coastal batteries that existed in the old municipality of Realejo Bajo. It was built in 1808 to protect the locals from pirate attacks. 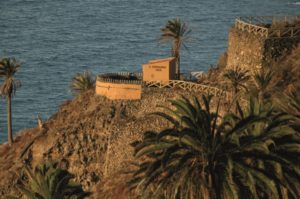 The Castro dragon tree (Dracaena draco) is a magnificent specimen that stands out in the lush palm grove. Observing its trunk and its branches, we can estimate it to be around 150 years old.

The Castro or “Mayorazgo” estate is the principal and oldest estate on the coast. It offers retreats of suggestive beauty where the sound of the sea is sometimes drowned out by birdsong. Originally built in the 16th century by Hernando de Castro, the current building stems from the 17th and 18th centuries with parts added later on. It was surrounded by spacious gardens that went to the rim of the lush ravine in front of Castro or “camel” beach. 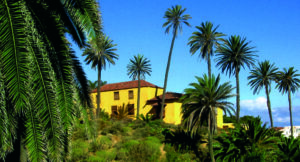 The hermitage of Saint Peter must have been built during the first years of the 17th century. Situated beneath the outlook of the same name, from its entrance you get an unsurpassable view over the entire nature reserve. Every 29th of June a beautiful arch of fruit and vegetables is displayed on the outside to commemorate the saint. 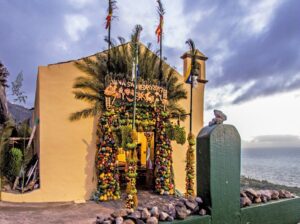 Centuries ago the roads connecting our villages were called “caminos reales”. The camino real passes by Saint Peter’s hermitage and is one of the few sections preserved in the municipality of Los Realejos. 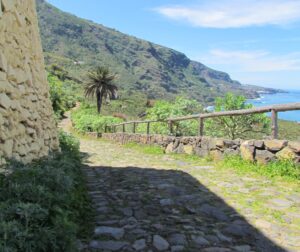 The place name “El Guindaste” (jib crane) derives from its past as a pier. It denominates a structure consisting of three beams that was used to load and unload boats. 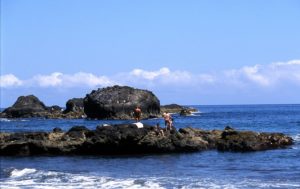 The house “Las Cuatro Ventanas” (four windows) which today is a tourist accommodation, belonged to the Vergara and del Hoyo families and later to the marquisate of Celada. Its name derives from the windows in its upper floor that overlook the sea. 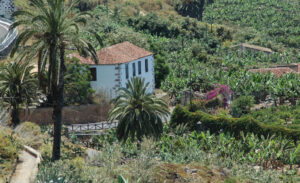 The Estate of the Viscount of Buen Paso

Along the old “Camino de los Morales” (Bramble Road) which is still called by its old name even though nowadays no brambles exist in the area any more, stands the Hacienda which  elonged to the viscount of Buen Paso and marquis of San Andrés. It had dwellings for the sharecroppers, gardens, seating areas and the main house with a U-shaped floor plan, inside which is a courtyard which was divided by a wall after the partition was made in 1863. 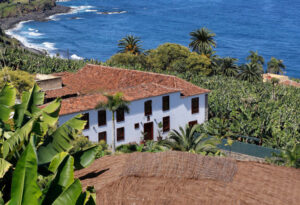 In the area of “Babón” lies the estate “Hacienda del Socorro” which is named after the hermitage built to Our Lady of Perpetual Help around 1617. Inside, the full-size statue of the name-giving saint presides over an interesting altarpiece in which the portraits of the founding family appear. 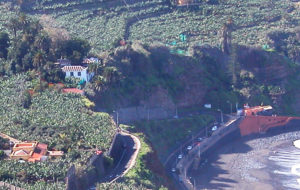 
If we pay a little attention along the way, we can observe the most representative passerines of the coastal areas of the island’s north, between Los Roques beach and the San Pedro lookout. Among the species and subspecies we can see here are the Eurasian blue tit and the leaf warbler, the Eurasian blackcap and the Sardinian warbler, blackbird, grey wagtail and the ever present Atlantic canary. Some of these small birds, but especially the leaf warblers and the Sardinian warblers, like to build their nests in the dense Canary incense that grows close to the house.
In the surroundings of the Rambla de Castro estate manor we find a large, apparently man made grove of Canary palm trees (Phoenix canariensis). In places the foliage creates a dense cover where leaves and trunks intertwine, forming a refuge for winged species such as the long-eared owl or certain types of bats. From a geological point of view, and even delving into paleontology, a journey through this part of the island’s north coast offers insights into relevant and little known facts. With help of a specialist guide we can discover elevated beaches, the remains of large scale landslides, the imprints of plants in rocky layers and molds of thermophile trees and bushes that were covered by ancient streams of lava.