The coast of Los Realejos conceals many historic and natural attractions. The greenness of the banana trees and palm groves together with the charm of its stunning manors guide us into one of the most prominent protected landscapes in the Canary Islands.

Many rare and unique natural elements of great scientific interest can be found in this area, such as the old Canarian palm tree groves.

In addition, the area houses many protected endemic plant species of interest in the European Union.

The so-called Mayorazgo de Castro [the Castro Manor] dates back to the 16th century and it was founded as a consequence of the division of lands carried out by the then island’s governor, Alonso Fernández de Lugo, after the completion of the Spanish Conquest. 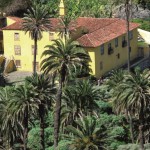 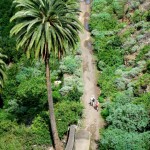 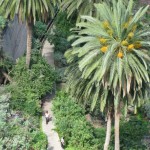 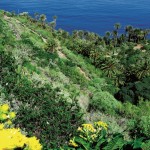 The hermitage of San Pedro [the hermitage of Saint Peter] is located on a hillock overlooking the whole area. This 18th-century building houses the image of the Apostle, a Canarian Baroque-style sculpture. The Castro Manor is located further down between the mouth of Godínez ravine and the Rambla del Mar. This 16th-century manor is considered the most important manor in the coastal area.

On one end of the estate, we find San Fernando’s Fort. This defensive fortress was built in the late 18th century and, in 1808, was equipped with a five-cannon embrasure (three of which are still preserved), placed under command of Agustín de Bethencourt y Castro. The fort was built because of the state of insecurity in the coast, due to the presence of pirates who would attack and rob ships leaving the islands towards Mainland Spain.

The ruins of Gordejuela Water Elevator, built in 1903 by the Hamilton family, can be contemplated from Castro’s mansion and many spots in this natural reserve. The construction of this elevator is a unique feat, given the rugged and steep land on which it was built and the installation of the first steam machine of the Island. Its aim was to use water streaming from Gordejuela to move a mill and take water to banana plantations in both Realejo Alto and Realejo Bajo municipalities.

Water was forever present in this area, making it one of the greenest, richest and most fertile areas on the island. Besides the beautiful palm groves, the vegetation of this landscape includes a number of species which have adapted to unfavourable conditions with an abundance of typical coastal plants, such as ‘cardones’ [big cactuses] and ‘tabaibas’, as well as dragon trees: the most representative tree of the Canary Islands.

Most of the birds nesting in Rambla de Castro are endemic and represent the best example of adaptation to the environment and the evolution of species. The area includes some highly important areas for different biological stages of animal species, such as the breeding stage of the Cory’s shearwaters, an endangered species of special interest, which has been included in the Spanish National Catalogue of Endangered Species.