Every year, on May 2nd and 3rd, Los Realejos changes colour. Many academics have dedicated articles to the particular peculiarities of the celebrations that take place here. The celebrations, although strikingly different in their approaches, are united by one symbol during the Feast of the Holy Cross and the huge fireworks display: the Cross.

More than three hundred flower crosses can be found across the municipality on these days, although there are certain places in which the festivities are celebrated with greater intensity: La Cruz Santa and the two streets of El Sol and El Medio. Hundreds of crosses can be seen in both these epicentres on paths, shopfronts, in windows, inside houses and patios, and chapels. The crosses are decorated with the most beautiful flowers, while candles and lights are used to make beautiful altars. This is a tradition that is getting stronger as the years go by as the next generation inherits the custom. 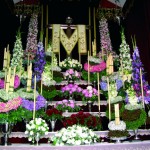 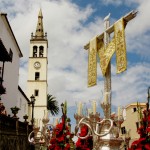 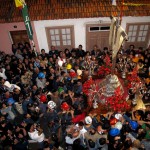 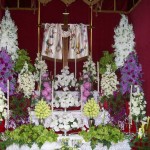 In addition, there is also a very local tradition involving a fireworks show in honour of the Holy Cross. The story of this particular show started with a rivalry between two streets: Calle del Sol and Calle del Medio. The residents of Sol street were mostly the middle class or farmers, whilst the residents of Medio street tended to be from aristocracy or members of the bourgeoisie. Initially, they fought to out-do each other when it came to decorating crosses, however this friendly rivalry escalated in the 18th century to include seemingly unending waves of fireworks, which eventually evolved into the fireworks show that we see today.

This fantastic show, one of a kind in Europe, lasts almost three hours. The continuous barrage of gun powder and fireworks creates enchanting beats and light effects in the skies of Los Realejos.

In 2009, this event was declared to be a celebration of interest to Tourism to the highest degree.

On March 26th 2015 the Spanish Ministry of Tourism declared these festivities to be of national touristic interest.